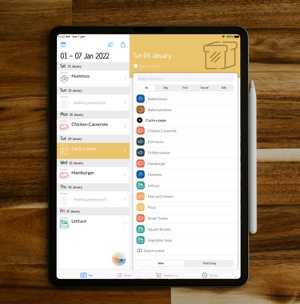 This release is fixes some problems that I discovered while testing v1.50.

The main fix is about printing. I had found some edge cases where the print feature produced bad results; after some investigation, I realized I had to rewrite most of it in a nicer way. So now printing is much improved, and produces nice pages using the marvellous PDF features of iOS. Shopping lists is the area where printing has changed more: now lists are in 1 to 3 columns, and can be on multiple pages. I also added some nice touches, like the aisle header repeating for each column.

Another fix is about shopping lists themselves. A user from Italy signalled a bug in shipping lists calculations, and provided plenty of info; with his input fixing the bug was a breeze.

Another nice user used the contact form inside the app to suggest a feature I hadn’t thought about, a “Today” button. As soon as I read the suggestion I realized I did need to add this feature, and so the “This week” button was added. It’s that viewfinder icon on the upper right, give it a try, it’s quite handy!

So the message is: do write and contact me with bug reports and suggestions, your input is super valuable!